Right now, according to the City, the population of Austin is less than 50% Anglo or white, non-Hispanic. And yet, according to a Greenlights Central Texas Board Report from 2011, about 90% of nonprofit board members are white.

How did it get this way?

Austin does indeed have a long history of systematized racism, much of which only ended a few decades ago. We also have a well-documented problem with racial and economic segregation. It might seem inevitable that nonprofits should fall into these cracks in Austin’s progressive veneer, but in fact, the lack of people of color in nonprofit leadership occurs at the national level, too. Austin isn’t alone in this.

One of the overriding factors is this: The sheer difficulty of recruiting board members at all. Board members are top-level volunteers who are asked to commit loads of time, raise money, govern and ultimately bear responsibility for a nonprofit while also leaving the day-to-day operations to staff. They should care passionately about the organization and bring something — time, talent or treasure — to the table to support its mission. Most nonprofit leaders struggle to recruit any board member at all, much less those from a specific race or nationality. Greenlights (now Mission Capital), a nonprofit that serves the social sector, reported that there are about 7,000 open board seats in Central Texas in 2013.

Yet most boards continue to recruit the same way they always have. They pull from among the current board members’ friends and colleagues or they pull up from the ranks of that organization’s donors and volunteers. And what compounds the problem is that that people of color are underrepresented within mainstream philanthropy. The fact is that whites make up 64% of the U.S. population but constitute 75% of U.S. donors, according to a Blackbaud study.

“I don’t think I’ve ever heard anyone reject the idea of diversity,” said Ken Gladish, Ph.D., president and CEO of Seton Foundations. Gladish was one of seven panelists discussing nonprofit board diversity at the New Philanthropists Project’s inaugural event on July 28, 2015, at the LBJ School of Public Affairs. The panel discussion, a first of its kind in Austin, was presented by GivingCity Austin and Mando Rayo + Collective in partnership with the RGK Center for Philanthropy and Community Service.

“In some sense, increasing board diversity is a moral issue, but it’s also a pragmatic recognition of reality,” said Gladish. Gladish was referring not only to demographic trends pointing to an increase of people of color (and their purchasing power) but, on the flip side, the shrinking base of white donor prospects. Every nonprofit — and every for-profit, for that matter — is compelled to expand its audience. Organizations won’t grow if they continue to mine the same target audience year after year, a reality public television is facing right now with its traditional audience of “older white people”, for example.

It’s not as if nonprofits don’t recognize that they have to message different groups differently. Think about the current trend in messaging specifically directed at Millennials. Nonprofits across the country recognize that reaching and engaging this demographic is going to require strategies different from those they currently use for traditional donors. They also understand that even though Millennials may not be able to contribute at a higher level right now, it’s imperative that they start cultivating that demographic for future fundraising. And yet, the idea of cultivating people of color seems lost on nonprofits. (More about Millennials versus Hispanics here.)

But diversity doesn’t just affect a nonprofit’s fundraising ability, it also plays a role in how well the nonprofit accomplishes its mission. Panel moderator Vanessa Sarria, policy initiative and advancement director for the City of Austin Mayor’s Office, told the story of one organization’s attempt to reduce crime in one neighborhood.

In her story, she said that there had been a rash of burglaries in the homes of seniors in this particular neighborhood, and they suspected that young people were entering these homes through open windows. When the organization considered how to solve the problem, it took the unusual step of asking the community members — low-income people of color — how they might solve the problem … and it was surprised when they requested funds for air conditioning units.

It turns out the senior homeowners kept the windows open because they didn’t have air conditioning. As a result of reaching out to community members for help, the organization had a better understanding of the issue. In the end, the seniors not only got the air conditioners, but they also enlisted the neighborhood’s young people to have them install them, and that gave these young people a chance to get to know the seniors and build a relationship with them. And the number of break-ins decreased as a result.

How to make it happen

For some nonprofits, creating a diverse board comes down to one thing: the mission.

“It’s really simple,” said Christopher Kennedy, president of Leadership Austin. When you are recruiting for the board “your first lens should be the mission of the organization.”

For Leadership Austin, which prepares people to serve the community through leadership training and skills development, inclusion of people from different cultures and viewpoints is one of its core values. And that means that the board must reflect the prospects it serves. Currently less than half of the 23-member Leadership Austin board is white.

Kennedy made it clear that board make-up was intentional, and that it was the staff leader who had to make that change happen. “If you’re uncomfortable having the diversity conversations you’re not going to change,” said Kennedy, “and I’m sorry but the CEO of the nonprofit is going to have to be the one to make that happen.”

“I don’t think we have to over-complicate this,” said Virginia Cumberbatch, an Austin native who re-booted the Austin Area Urban League Young Professionals and founded the new marketing agency Hux Storyhouse. “Our model has to change.”

Sarria, panel moderator, solicited actionable steps nonprofit leaders could take in order to increase diversity. (Click here to read “8 Ways to Increase Nonprofit Board Diversity”) But a question from the audience allowed the panel to consider what diversity and inclusion were not.

While Cumberbatch said she didn’t think it was fair to ask a single African-American on a board to represent the entire population of African-Americans, Erica Saenz of UT Austin’s Division of Diversity and Community Engagement said, “At the same time, if you are that person on the board, you need to speak up and try to represent that viewpoint.”

All of the panelists agreed that seeking out a “token” did not count as inclusion, but Salahud-din described inclusion as “just feeling comfortable about being there” if you’re a person of color, with Cumberbatch adding, “As an African-American woman, don’t make me feel like I have to conform to the rest of the board.”

Kennedy added that it’s important for all board members to understand that their service doesn’t just happen at meetings; rather it’s each board member’s responsibility to network and share the mission within their own communities. And that when a person of color serves on a board, the nonprofit not only benefits from that individual’s resources, but the resources cultivated from that person’s network. 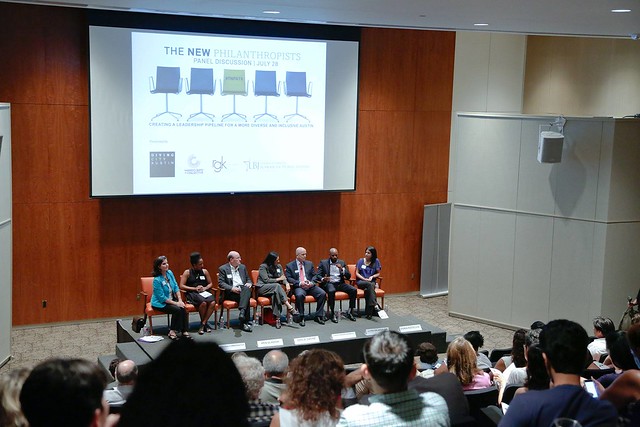 Learn more about The New Philanthropists project and sign up for news about upcoming events and opportunities.

About givingcityaustin 900 Articles
GivingCity is Austin's only cause-focused media company helping people and organizations understand our community and inspiring them to make it better. Online, in print, broadcast and live. Learn more.

This site uses Akismet to reduce spam. Learn how your comment data is processed.

First of all, volunteering in a way that violates the shelter-in-place, social distancing rules is a very bad idea. Most volunteering work that would violate those rules has been shut down anyway. As is true Read More

Walter Moreau, executive director at Foundation Communities in Austin, said he’s running mostly on adrenaline. As of Wednesday, 56 of the 140 client-families who recently escaped homelessness can’t pay their rent because of lost wages Read More

Nonprofits that provide in-person services that are a lifeline for their clients are struggling to find new ways to deliver those services during the coronavirus crisis, even as the nonprofits’ financial stability is at risk. Read More